‘Project Icarus’ Interview A Bit of the Old Super-Powered Violence

If you thought superpowers always ended in high-flying heroics…think again!

In the following inter writer Andy Owens (I.T. The Secret World of Banking) and artist Patrick Blaine present an alternative to the PG-13 superhero genre. Brace yourself. Things get messy are about to get messy in Project Icarus #1 (NOV191581)! 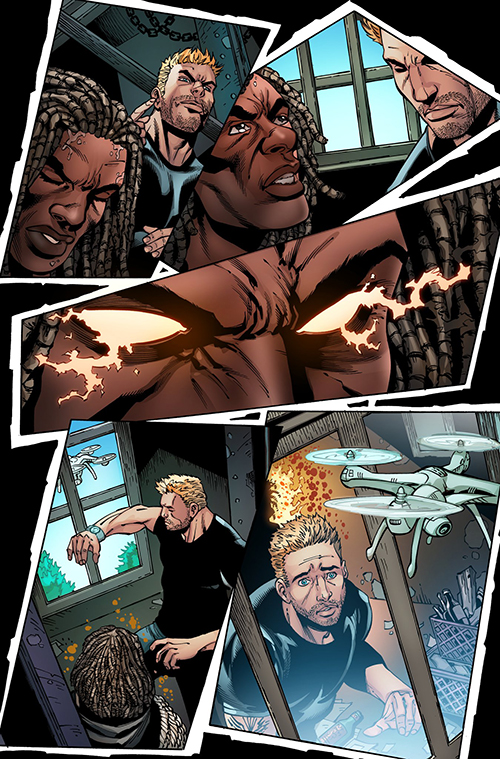 PREVIEWSworld: Catch us up to speed. What is Project Icarus?

Patrick: Project Icarus is a story we produced for BlackBox comics. They wanted a comic for their line that explores dark themes with a sci-fi/superpower twist. We touch on corruption, genetic manipulation, politics, graphic violence and even a bit of romantic tension. Andy did a great job of weaving it all together in the story of Max Green, who is caught up in dark machinations beyond his wildest imagination.

Andy: That description works. I would sum it up like this: It’s a balls-to-the-wall action thriller that I hope leaves you satisfied yet, wanting more. Trying to create a world here with hopefully, believable characters and an intriguing plot is always fun. But this is also comic books. I had an editor tell me once that his general rule is, “at least one action scene per issue”. So, my thought is, “if I’m creating a new book and want to give readers the most bang for their buck in my story, then why stop at one action scene”. I try to deliver at least 2 per issue. Each book is packed full of plenty of classic comic book style action that I hope delivers.

PREVIEWSworld: What type of genre does this fall under? There seem to be horror elements…

Andy: I wouldn’t call this a horror book at all. It’s an action thriller. I’ve set the series up so that our villains can be as dark, evil and grotesque as we want. Having 100 or so of the most evil people around, given superhuman powers, gives us plenty to work with for future stories. But in general, it’s a good, old fashioned action book. I’d like to think that I’ve added some good backstory and some mystery involving the people pulling the strings too. If we are lucky enough to keep this book going past its initial 5-issue arc, I’ve set up enough threads to pull on that I could easily see 100+ issues here.

Patrick: While there are horror elements, I too, always saw it as a more, straight forward action thriller that doesn’t shy away from the more gruesome aspects of super-powered violence. And the evil bastards that use those abilities in ways that some may find…disturbing.

PREVIEWSworld: Tell us about Correction Officer Max. Why do we follow him through this story, specifically?

Patrick: This isn’t a story about being a Correction Officer. That is simply our jumping-off point. Really, it’s the story of a man who has a dark past, and is trying to drown those ghosts in alcohol and drunken bar fights, when he finds himself embroiled in a sinister plot to create physically enhanced agents of chaos, he has to come to grips with his own newly developed superhuman abilities. How does one use such powers? It would be easy to turn to a life of crime, but the memory of his late daughter inspires him to take a different path.

Andy: I agree. The fact that Max is a corrections officer has almost nothing to do with this book. It’s just a job that he’s found himself in at this particular time. In fact, when we meet Max, I think that it’s fair to say that, if not for the events in this book, he wouldn’t even have this job six months down the line. He’s a former Army Ranger turned police officer who is drinking himself to death. This story is partly about his return to a real-life and having a purpose once again. Max went through a lot and he chose to let that pain destroy him. He’s using these newfound powers as a reason to live again.

PREVIEWSworld: How did you both get involved/come together on Project Icarus? 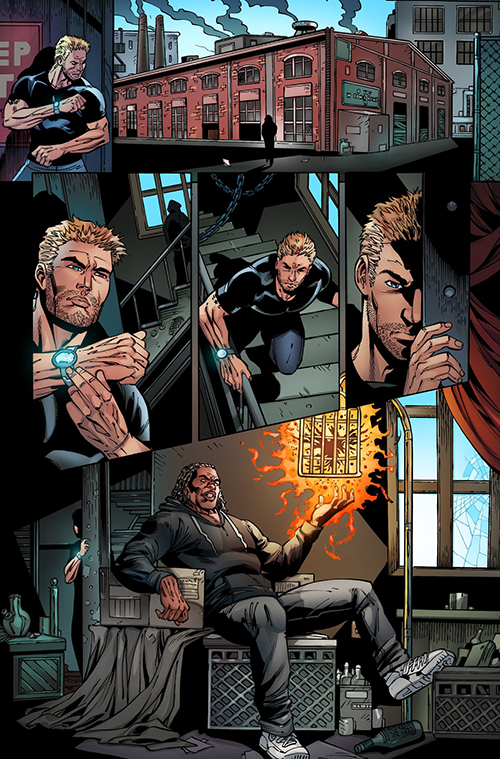 Patrick: Andy had worked for BlackBox on their successful comic “I.T. ” and he had stayed in contact with Dimitri Zaharakis who is the creative force behind the company. Dimitri approached Andy with an idea for a new series, in which he wanted to explore certain themes. Andy took those ideas and ran with them and wrote all five issues of Project Icarus. Andy and I have been great friends for decades, and I was reading the scripts he was producing. I asked him if they needed an artist for the book, and did a little bit of sample art. Dimitri liked it and that’s how we started our collaboration for this series.

Andy: Yeah, Dimitri and I have been friends for a while and I showed him some of the creator-owned book that Patrick and I are working on. He must have liked it because he threw out the idea of me writing one of his books. He gave me some of his basic concept pitches to see if one grabbed me. One idea got the juices flowing and the next thing you know, Project Icarus was born.

Patrick and I have been friends forever. And as I wrote each issue, I would send the script to him for his feedback. He and I have talked story and art for so many years that I respect his opinion and insight. And even though I knew it would put a temporary halt to our other book, I think I might have been laying the groundwork to have him draw Icarus. My first published writing job needed an artist that I trusted to knock it out of the park and I can’t think of anyone better suited for the task than Patrick.

PRWEVIEWSworld: Are you having fun drawing all the grotesque action? 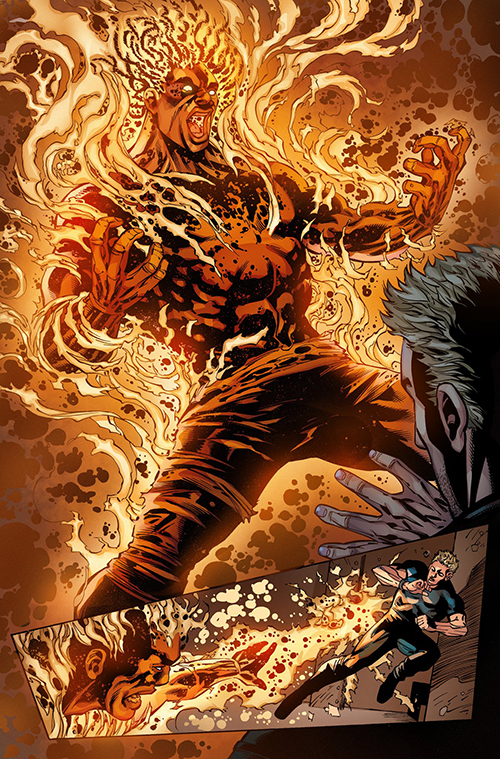 Patrick: Of course! One of the fun things about working for BlackBox is there are no restrictions on graphic violence or content. We just do whatever the story calls for, and can be as violent and bloody as we need. It’s a liberating feeling for an artist for sure!

PREVIEWSworld: Looking forward, what can readers expect from Project Icarus?

Patrick: All five issues explore a different challenge facing Max as he tracks down the other enhanced beings from the Prison. Hopefully, the readers will enjoy the ride as Max faces these new, unique threats and we get to follow along as he flexes his own newly enhanced muscles and abilities in the process.

Andy: I want the book to read like a great T.V. show. We can have a villain of the week, or of the season for Max to confront but the series will always be surrounded by the umbrella of the corporate villain behind it all. That mystery should deepen even when some answers are given. And let’s not forget the direct antagonist to Max, Dr. Harold Barnett, the Slasher. He’s Max’s Hannibal Lecter/Joker nemesis that always seems to have his very sharp claws in the mix, so to speak.

PREVIEWSworld: In terms of audience, who is Project Icarus for?

Patrick: Anybody that likes a darker twist on the superhero genre, action, violence, and political intrigue. We hope they will give Project Icarus a try!

Andy: Exactly! I will say though, that we created this with an R rated movie-feel, in mind. We have gruesome violence and a bit too much foul language. I have two sons; one is 17 and one is 8. I wouldn’t give it to the 8-year-old, but the 17-year-old will love it. 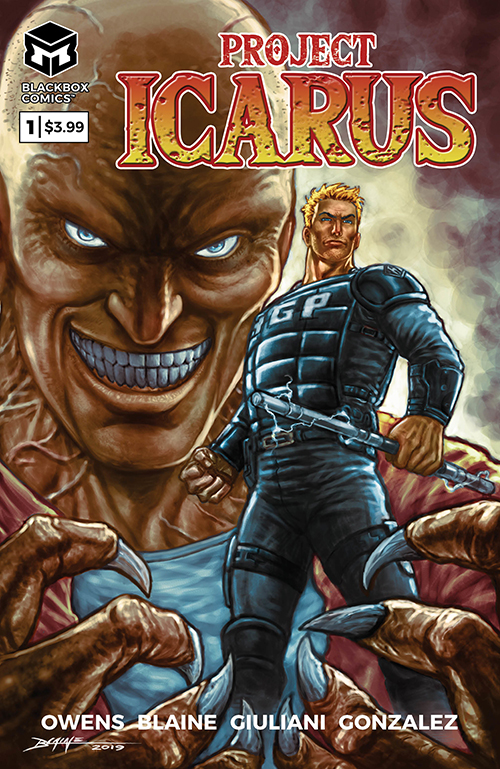